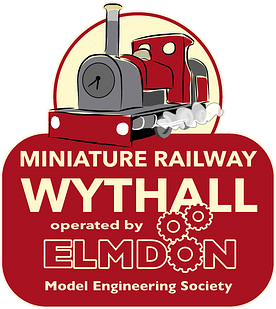 Elmdon Model Engineering Society (EMES) was formed by a group of Model Engineers attending a Sandwell night school course in the early 1980's. The idea was to give an alternative to other clubs in the Greater Birmingham area. The first site was close to Elmdon Airport, explaining the name. A lot of hard work was put in by founder members to provide track and facilities whilst a battery powered club loco was built.

Sadly, running trains at Elmdon was not a success. Visitors to other parts of the site would often leave their cars parked foul of the track and disappear for hours on end. Repeated attacks of vandalism culminated in much of the track being ripped up and the loco stolen. Disheartened but undeterred the Society gave up on the site and looked to new (and hopefully more secure) pastures.

An agreement was forged with Tyseley Railway centre, a large working Museum in Birmingham. 7.25" Track was laid and 'rent' paid in kind, the EMES members undertaking many chores and maintenance tasks around the Tyseley site. The agreement seemed to suit both parties very well.

Shortly afterward, a new General Manager of the Tyseley Museum was appointed, someone who made it pretty clear he had no time for the Society, its members or the Railway. Ever increasing demands for work in lieu of rent were topped by a private individual being brought on to the site to run his own railway, and the Society was to do all his chores! This brought the club to the point where no one had any time to run a loco or smile a little......The writing was on the wall.

An agreement was reached between the Society and Birmingham and The Transport Museum Wythall, providing a large but derelict part of their Wythall site for EMES track and facilities.

Members set to with gusto, spending 5 yrs turning the abandoned area into the manicured vista of today. The partnership is a successful one, EMES have a splendid home site whilst museum main open days are enhanced by EMES trains running for visitor enjoyment.

Although EMES members pay an annual membership fee, they put time in to keep the EMES track, locos and rolling stock running sweetly. They also 'pitch in' to keep the Wythall site maintained and run open day trains on an entirely voluntary basis. Outside events are put on using a portable track to capture some much needed club funds. Insurance, electricity and lots of other things make heavy demands on the EMES exchequer.

Below are a couple of pictures showing the huge effort expended by a small membership to get the Wythall Miniature Railway established.